Earlier, I mentioned that alliums and Dogtooth violets (Erythronium ‘Pagoda’) were planted over the weekend. More time was spent trying to figure where they should go than time spent planting, but that’s behind me with a lesson learned (unlikely). Now, the thought has occurred that in early spring I planned, but later failed to order fifty or a hundred Winter aconites (Eranthis hyemalis, below) to add to the two lonely bulbs at the start of the front walk. Once there were more, but as one thing or another was planted in the area, most were dug up and lost, I suppose. 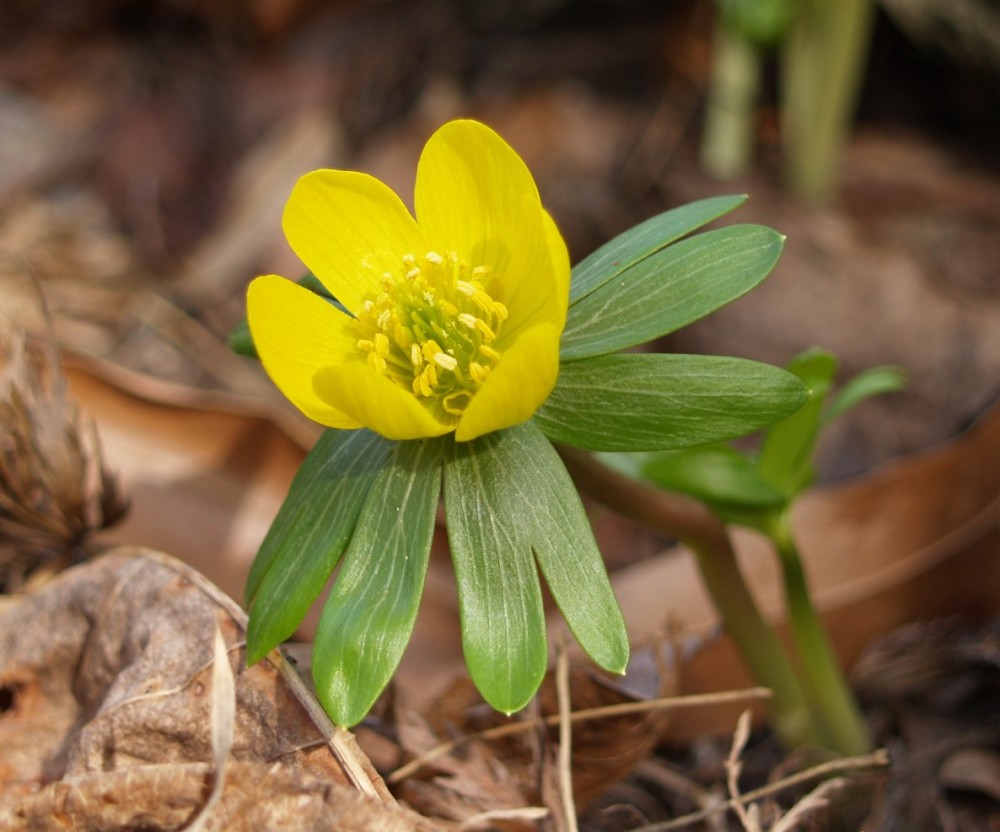 I believe that I also had plans to add fifty crocuses to the same area, and I recall admonishing that too often too few bulbs are planted to make a proper show. Without the added aconites and crocuses this spot will continue to be embarrassingly bare in early spring. I suppose there is still time to plant, but I was so pleased to be finished planting several hundred alliums that I’ve lost enthusiasm for planting more bulbs. And, it’s getting colder and I don’t cherish the thought of crawling around in the mud. Perhaps I will make proper reminders to order these next year.

As always, I do not look forward to shredding leaves in the largest part of the garden where they cannot be left to decay on their own. If the piles of leaves are not shredded and spread, hellebores and late winter bulbs will be hidden, but there are many weeks ahead for this chore to be accomplished. This weekend I must clear the driveway and front walk for guests next week, and while I’m at it a few of the garden paths will at least be blown clear in case anyone cares to tour the garden. After all, there are camellias and mahonias (Mahonia x media ‘Winter Sun’, below) in full bloom.

Remarkably, flowering pears (Pyrus calleryana, below) in the neighborhood have not yet turned to the deep burgundy that demands attention after other trees have dropped their leaves. With splendid spring blooms and exceptional autumn foliage color, pears would be marvelous trees if their seeds were not spread by birds to invade every open field and fence line in the county. Of slightly less concern, pears are also weak wooded with a tendency to split apart in summer storms. This lovely tree should be avoided.

Sometime before spring the last of three European hornbeams that has died must be removed. Two others were cut down a few years ago, and now the third has died. I cut down the first two that were planted in a grove of bamboo, and I was not concerned that the bamboo would be damaged since it was also planned for removal. Now, with the hornbeams and bamboo gone, the area has been planted, and I will have to hire a tree company to take the remaining hornbeam down to minimize damage.

And then, something else must be planted in its place, but at this point in the year there’s no hurry.